Deck was realised end of June and protected with Decks Olje D1. All fine during the summer. In October a fence was add to the balcony and while being constructed the decking was scratched. Client had the deck sanded, he says by the professional, so I assume by the same people who installed the fencing since they were the people who scratched the deck, to remove the scratches and 2 applications of D1 applied. The first application of D1 being applied 2 days after it had rained, the second applied 8 days later.

The first thing to say here is that the D1 was applied incorrectly and thus the second application has created a film on the surface as indicated by the glossy appearance. D1 should be applied wet-on-wet that is to say that as soon as the first application has gone in, you apply the next, continuing this process until the wood will accept no more oil. At this point you leave the last application approximately 20-30 minutes and then brush out or wipe up any areas of oil that are puddling on the surface and leave to dry. On a new Ipe deck I would expect 2-3 applications of D1 is all that would be needed. What should be noted is that D1’s place is in the wood not on the surface.

From the information and photos we have, there are a number of issues here but the short answer to the blotching is, that it is water damage. So why has this blotching occurred? Under normal circumstances the drying time given for D1 is 24 hours but D1 is a naturally air drying oil and thus its drying time is affected by temperature and humidity. Low temperatures and high humidity will both slow the drying time of D1, whether each as a separate factor or a combination of both. October was a very wet month and we also had overnight frosts. What has happened in this case, is, that it has rained some time after application and the rain has been continuous or a short heavy downpour; from the photos I would say the latter is the most likely. The D1, due to the factors mentioned above was not dry enough, prior to it raining, for it to with stand a heavy downpour. As the rain hit the oil, so it broke it up causing it to dry as blotches, the larger blotches are also due to where water has sat as a puddle on the undried oil preventing it from properly drying, while the whitish appearance is due to the oil at the surface of the wood being washed away by the force of the rain leaving the wood with not enough oil in it to give the right appearance and possibly emulsification of the undried oil due to the rain hitting with force. This issue was further exasperated by the fact that the D1 had been allowed to create a film on the surface, something it is not designed to do. Creating a film of D1 on the surface will also increase its drying time especially in the moist atmosphere we had in October. The only reason these marks were not seen sooner will be due to the deck not properly drying out before then and thus not being seen.

For stripping the entire deck use Prepdeck. For stripping individual boards use Aquanett rather than Prepdeck as it has a thicker gel like consistency. This gives you more control over it, and reduces the risk of damaging good boards next to the damaged boards. With both Prepdeck and Aquanett the deck should be treated with Net-trol after stripping to restore the Ph and colour of the wood.

For the sanding method proceed as follows. Sand the affected boards using an orbital sander and 80 grit paper. The sanding is not to strip the oil off but to sand out and blend in the affected areas. Dust off and then wipe with a cloth saturated in Methylated Spirits (denatured alcohol) to remove any sanding residue. As soon as the Meths has flashed off, a SINGLE application of D1 can be applied. This will even out the finish and bring the deck back to its original look.

I have posted below photos of an Ipe deck where I got caught out by the weather (the weatherman said it wasn’t going to rain and it did!) using the sanding method. I hope they show you the white marking, similar to that in the photos above but just not as bad.

Which ever option the client chooses the work should not be carried out till spring at the earliest when the weather warms up.

On a final note, while sanding of the deck to remove the scratch marks was ok there was no need to apply 2 applications of D1. Why? While sanding the deck will remove the appearance of the oil it will not remove the oil that has penetrated in to the wood, only using a floor sander with a very coarse grit will do this. Applying 1 liberal application of D1 is all that would have been needed to restore the deck, since all you are doing is topping up the D1, which is still in the wood. 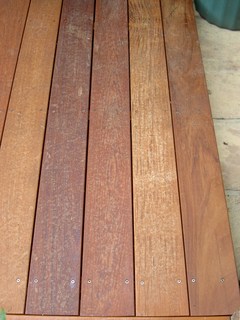 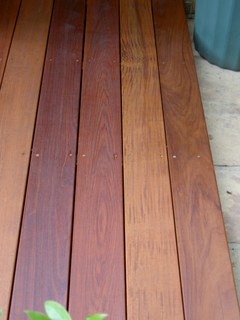