The Story Behind Shou Sugi Ban ®

Shou Sugi Ban ®… Manufactured in the UK not Japan…

Our exploration started around 2004 in a garden in Amersham, the smoke soared, the flames roared, the neighbours were annoyed and the street was covered in a dusting of black carbon. By design, by chance or a stroke of genius Shou-Sugi-Ban had been born in the UK.

There was nothing on the internet, we had barely just launched my first Landscaping website, no other references existed… I was in the dark. A friend of ours, Zenjiro from Fukuyama, Hiroshima, and I discussed for years whilst we created many different finishes; tried an assortment of timbers and still continued to annoy the locals…Yakisugi (焼き杉) is the traditional way to describe burning Japanese Cyprus. We used Shou Sugi Ban, a series of Japanese words, the grammar is poor and a description rather than a colloquialism. It does have a rough translation although not exactly correct…

From Japanese 翔 (shou) meaning “soar, glide”; or 奨 (shou) meaning “prize, reward” and old Kanji can be a boy’s name. Sugi 杉 meaning Cypress and in this instance is called by the west “Japanese cedar” which is actually Cryptomeria japonica, not anything like Canadian Western Red Cedar (Thuja Plicata), it is in fact a Cyprus wood. Not available in the UK commercially, whilst I do digress its more like Douglass Fir.

The final word in the trilogy is from Mokuzai-Ban meaning wooden Board, the single word Ban is one of prohibition… in broad sense it actually means “plate” (of steel) referring to board in this instance (of timber and many other materials).

The direct word for Board is “Ita”, from YakiSugi-Ita.

If you would like to check history, the first stop is a chap Professor Terunobu Fujimori whom lectures in Japanese Architectural History and uses the term Yakisugi… He know everything about Japanese construction traditions in Japan… shou sugi ban isn’t one of them.

We used small sections for additions to the materials palette in my landscaping projects but nothing too serious. This was until I was landscaping a scheme for a project in London and a requirement for a covering of a 5 story building came about. I jumped at the chance and suggested ShouSugiBan. Furthermore, the Architect thought it was a great Idea and with the client on board I created a wonderful cladding system to clad the wall in question… this then found its way on to the wall of a stair case inside the property. 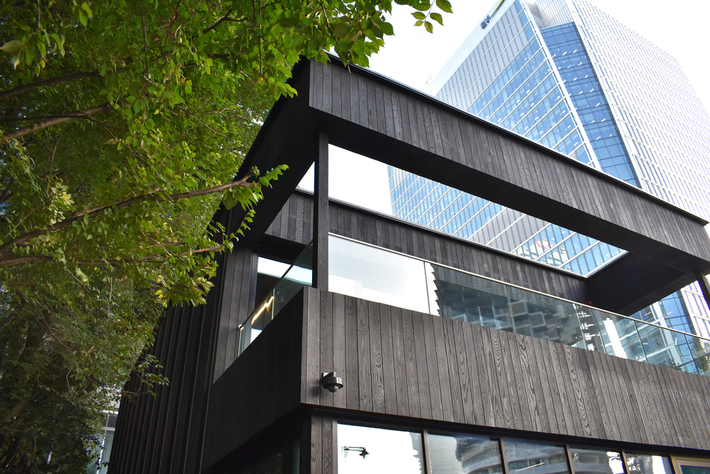 “Bringing elegance to a new level, inspired by traditional English Architecture and beautiful Japanese styling. This stately Georgian period property demanded a modern and orderly dynamic with accents from an oriental style.” I was and am still today privileged to have been involved in such a challenging project.”

I do often see many others starting to produce charred cladding projects; whilst I do wish them well I doubt whether they realise that when they deliver a pack of charred cladding and the contractor suggests that “it’s all stuck together… what are you going to do about it” they may question their oil, timber… technique… I know I have in the past and it was a very steep learning curve.

We do have a huge range of species, finishes and colours. Furthermore, we continue to research and will do so to enable Architects and Designers the flexibility to evolve in their creative imagination into unique and special projects. Manufacturing has now become a serious affair, specified for projects cross Europe, Hong Kong and the UAE. We now have European distributors and cover Iceland and the Baltics.

Our materials have been and continue to receive shortlistings with Architects and Designers; amongst RIBA’s best, winners of Surface Design Awards and Restaurant and Bar design awards in Hong Kong.

If it’s not ShouSugiBan® then it is certainly something else. ShouSugiBan is not ancient, it’s not traditional… it’s our brand of beautiful timber materials, manufactured by hand in the UK.

1 thought on “The Story Behind Shou Sugi Ban ®”