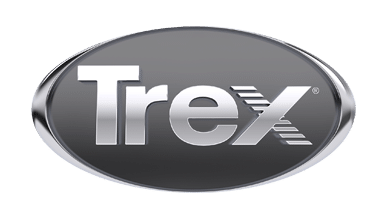 For this new garden design we had to consider the exact requirements of the client. In most cases a brief has a certain amount of poetic licence; this compared to the norm was not at all what the clients expected.
The clients requested an area to relax in, complete privacy, in a contemporary style and with a hint of Zen.

The back garden is over looked and too close to the neighbours, massive instant hedging was out of the question. I considered all options except one, “what about the front garden”, the clients hated the idea.

So how did I convince them, I simply asked them to wait in the area of discussion. I then left the property grounds and called them on their mobile. “Hi guys, what I want to do is now pretend that you are naked”, expletives deleted from them of course, then after suggesting they should open their eyes and have a look around. “Brilliant Idea Karl, we can’t be seen by anyone”

A garden design for a rear garden in the front

I wanted to create an island of deck that appeared to float on water. The budget wasn’t there and water of this scale  would be too expensive. I also wanted to incorporate a new entrance path to the front of the property. The iteration was quite simple, considering the balance of the property to the hard landscaping; I couldn’t get too carried away with anything fussy so I kept to a simple layout that welcomed the clients and new guests to a sleek and subtle wow for the front of their house.
Adding plants to the garden 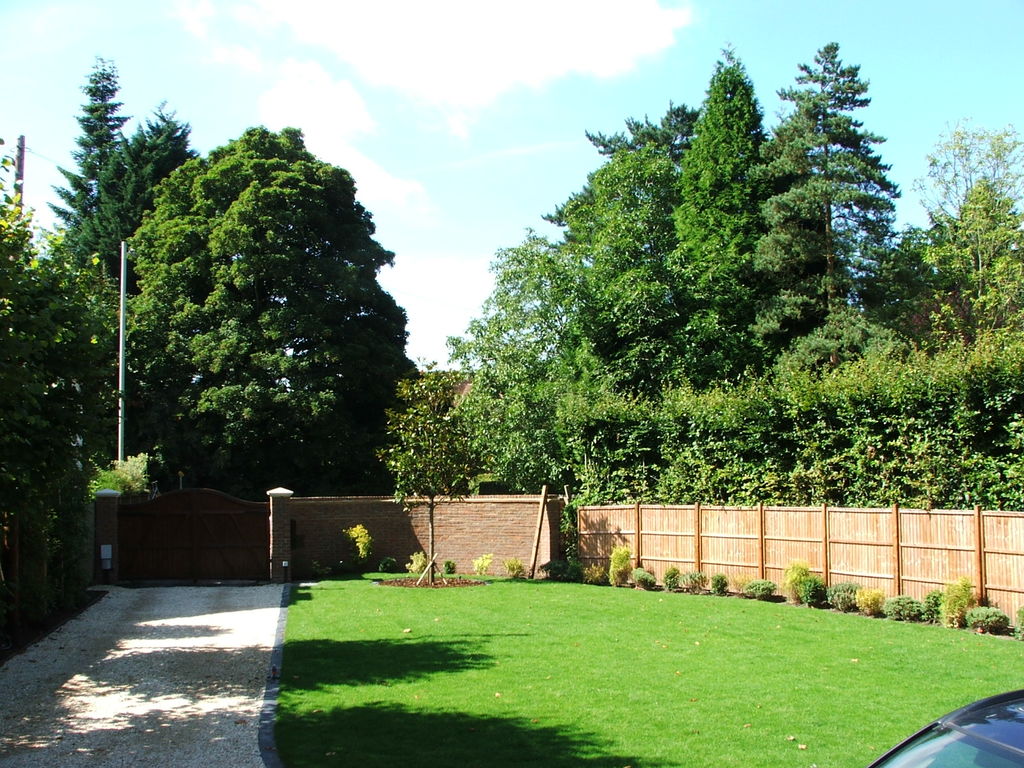 I added some large Photinia frames to the boundary to soften the timber fencing. A large Olea Europaea next to the central decking area made a definite statement. The tree was at least 100 years old.
During the garden clearance the existing plants we potted up and shipped to a local garden centre for temporary storage. There was a mix of spotted Aucuba, Laurels, Photinias, and Lonicera Nitida to mention a few.

Huge planting in the garden

We also planted a huge 14” Magnolia Grandiflora, the pot weighed in at a staggering 1.25 tonnes.
75 tonnes of soil, 270 new roles of turf, and the return of the existing plants and of course the new ones. I designed and installed an irrigation system for the client’s peace of mind as there is a lot of ground to water every day during the hot weather. 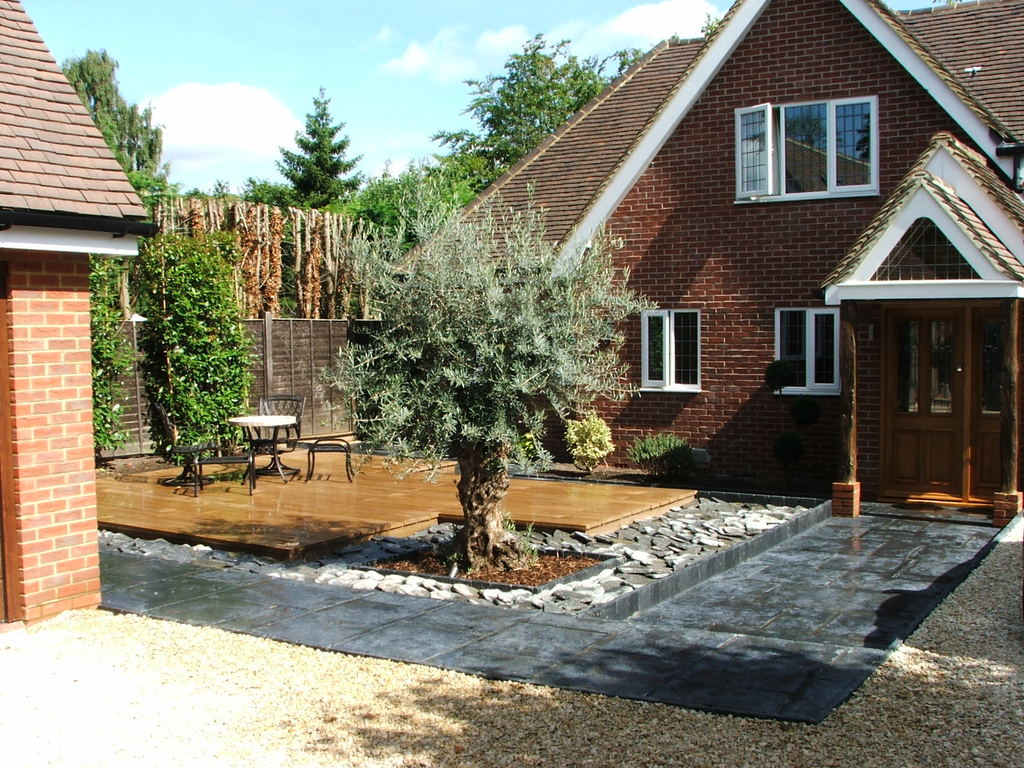 We wanted a contrast between the large areas in the garden, mainly the drive, paving and decking.
The drive was gravelled with Cotswold flat shingle, a great aggregate to use for a drive as the shape of the shingle is almost flat so it does bind together rather well and prevents the washing and rippling effect you see on most gravel drives.

The paving and edging was completed in a dark Limestone and sealed with Pavegard. The sets were great to use, very sturdy being 50mm thick and set into concrete will last for pretty much ever.

A great choice for any garden, whilst wanting to reduce the maintenance and keep the appearance of decking without it fading. Constructed at 400mm joist centres over double beams fixed to 100mm cat 4 posts and set into concrete – this will certainly last.

The black quartzite paddle stone that surrounded the deck created an island effect and when illuminated with the hidden LED strip the lighting scintillates like diamonds. 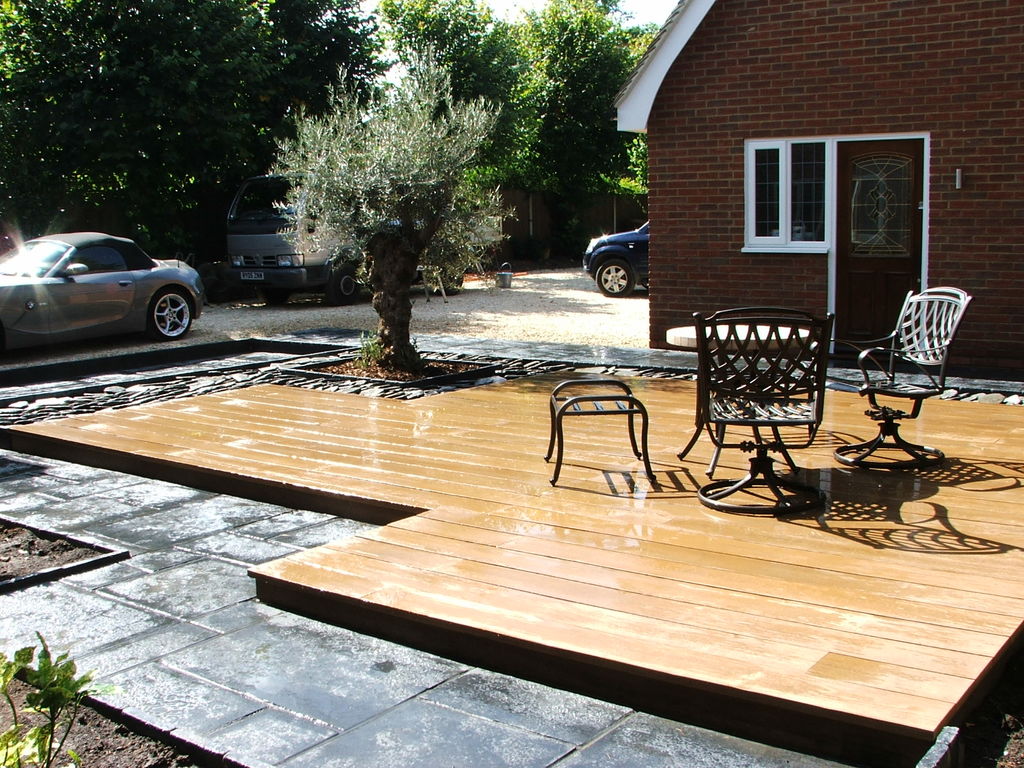 For any information regarding garden design and landscaping you can contact us and to purchase Millboard decking click here.

Building a designer deck in Beaconsfield